Building a Woodworking Business From the Ground Up 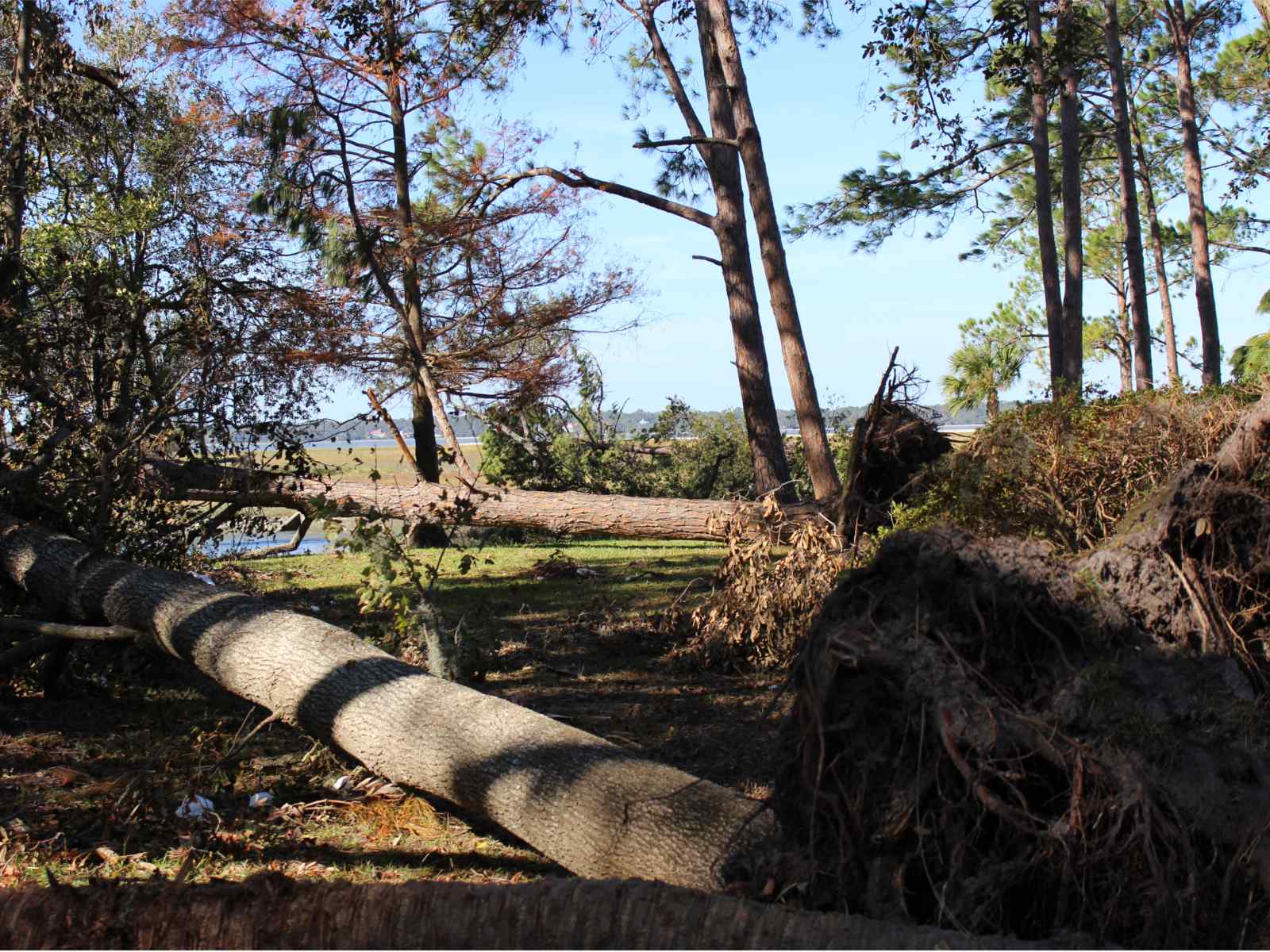 Everyone Has to Start at the Beginning

Many years ago I was staying with my Aunt and Uncle for the summer.  We were staying in a cottage that my Uncle was building.  There wasn’t much in the house.  We had to access the second floor with a ladder.  While there were beds, there was no other furniture in the bedrooms.

I decided that a shelf would be a nice thing to have so I went to the home improvement store and got a sheet of 1/2 inch plywood and a few 2x4s.  I sawed out the corners of the plywood and installed short blocks to hold up the corners of the shelf.  Only one problem, the 2×4 inch cutouts I made for the 2x4s didn’t look at all like what was needed.  I learned that 2x4s aren’t actually 2 inches by 4 inches (nominal size is 1 1/2 inch by 3 1/2 inch).  I also learned that 1/2 inch plywood is strong lengthwise but sags easily when flat unless there are additional supports added.

Having completed the shelving, my Uncle’s only comment was measure twice, cut once.  He was a man of few words but great wisdom. It was at that point that I decided that I would never build anything that poorly ever again.

Here’s one of the projects that I completed in time for my daughter’s birth.  My skills have come a long way from that sad 2×4 shelf. 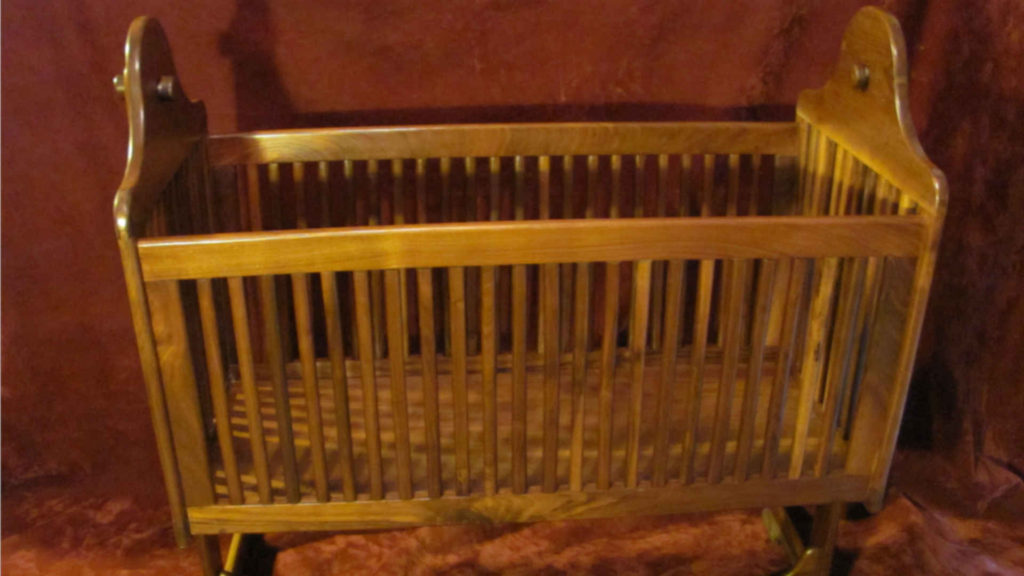 That was about 40 years ago.  Since that time I have learned how to put wood together and build things.  I have built a couple of Canoes and some Trestle Tables as well as a myriad of smaller furniture pieces.  I have spent many hours making sawdust in the shop. From those piles of Sawdust, I have created many projects and developed a skill set that allows me to make pretty much whatever I desire from wood. In the process, I’ve developed a great passion for working with wood.

Capitalizing on an Opportunity

In 2016 I had a life changing transition. During this transition, my special lady had Hurricane Matthew hit her parent’s vacation home on Hilton Head Island.  She asked me to help her with the storm clean-up and the renovation of the property.

Once the Island was reopened to owners, she flew down and rented a car to asses the damage to their property.  The house was unreachable.  Clean up crews had opened many of the roads but the fallen trees and limbs created a maze.  No landmarks were visible.  When she reached the house, it was totally surrounded by huge trees.  One blocked the driveway and several more created a circle around the house.  There was absolutely no way to reach the house.  Even climbing over fallen trees was impossible.

The next trip a week later was more productive as the landscaping company that took care of the property had opened up the driveway enough to get access and to park a single car off the road.  Tree crews were working everywhere.  We were able to assess the damage.  A huge volume of water had found its way inside the house and everything had started to mold.

Multiple trips ensued, we basically gutted all of the drywall from inside the house and remodeled the floor and several rooms.  Everything was made waterproof to ensure that we didn’t have to go through all of this again in the event of another storm.

A Focus on Wood

During the cleanup, all of the trees that had fallen had to be dealt with.  We were able to find a crew that had come to the Island from Atlanta and was helping some of the neighbors with their cleanup.  They consented to focus on our property for a couple of days and deal with our problem trees, all 15 of them.  I asked them to leave me 4 sections of Live Oak about 8 feet long.  Originally, I had intended for these to become a memorial piece in the house to commemorate the successful completion of the renovation. 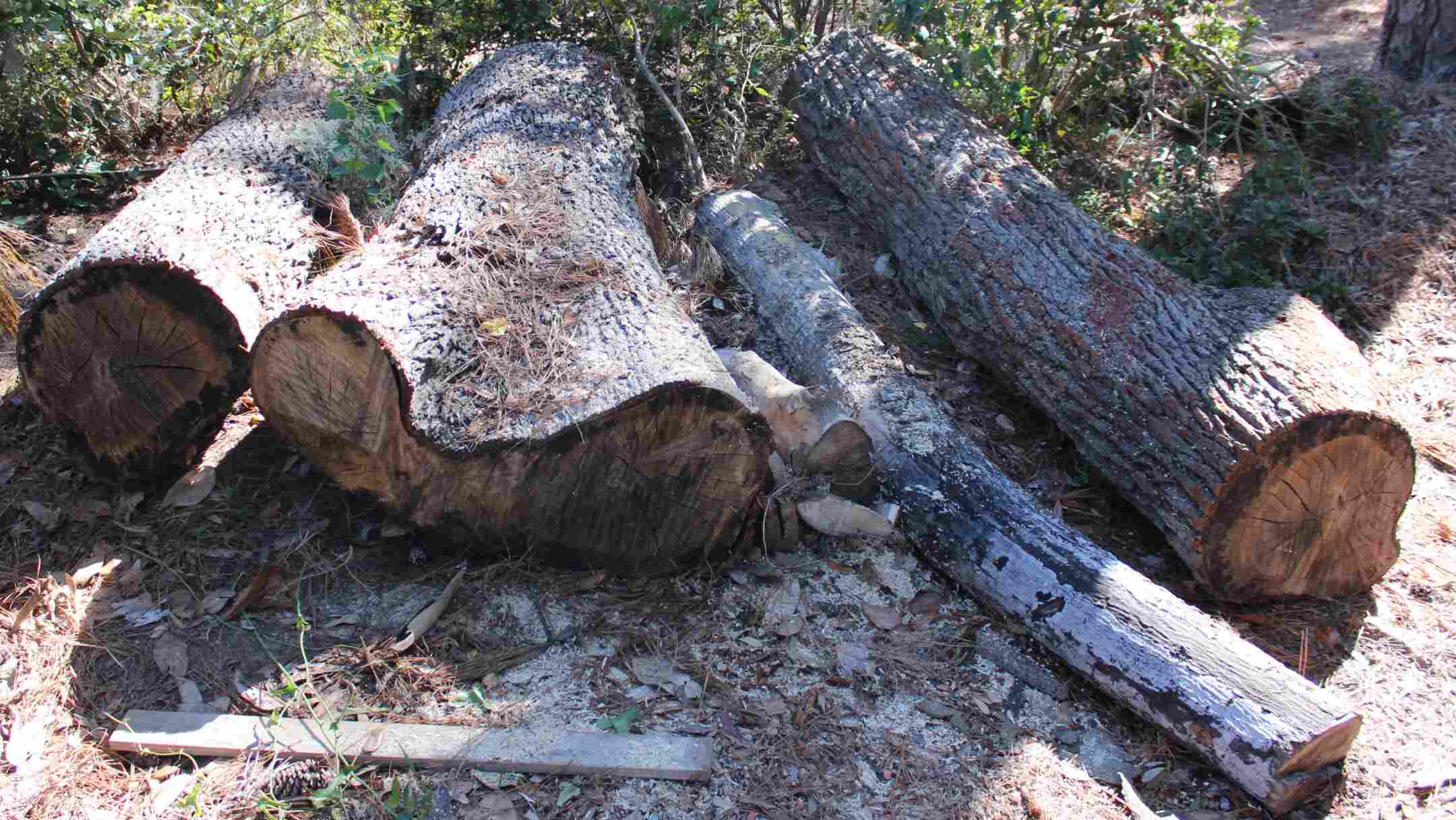 With all of those trees just laying around, my passion rose to the surface and I needed to harvest some of that timber for myself. My focus was on creating a stock of wood that I can use for my business.  Since I’m starting on a shoestring, I need stock to use for my projects.  This was a way to build up an inventory of wood to use when I have my shop in operation.  The slabs will need some time to air dry so getting them cut and drying was my first priority.

I designed an Alaskan Sawmill from David Groth’s design on YouTube.  He drilled holes in his Chainsaw Bar and installed threaded rod.  I tried to drill through my Stihl Chainsaw Bar but just ended up burning up 3 drill bits and never really making a dent in the Chainsaw Bar.  Apparently, the material that Stihl uses for their bars is harder than anything I have to drill through it.  I settled for a clamping system similar to that used by the Granberg mills and that seems to work pretty well.

I used this homemade mill to slab the Live Oak.  This took me most of a year to do. I was bouncing back and forth between New York, Tennessee and Hilton Head.  In New York, I was renovating my house to sell and dealing with Lawyers and such.  In Tennessee, I was trying to fine tune the Chainsaw Mill by cutting up a large Yellow Pine and a length of Cherry Tree.  Then in Hilton Head, we were coordinating the renovations and trying to steal time to work on the Live Oak.

When the house in Hilton Head was almost completed, guess who came to town.  Hurricane Irma.  Yup, this one wasn’t a wind and rain event by the time it reached the South Carolina coast. It was an 8-foot storm surge.  The island was flooded for several days.  Water again entered the house.  This time with all of the work we had done, there was little damage.  Everything had been waterproofed.  Still, we had to remove the pools of water and dry everything out again.  This was the last straw.  The house went on the market.

Two months later the house sold.  They wanted a quick close and we had 2 weeks to vacate the house.  I left Tennessee on Wednesday, after driving for 8 hours I got started on the milling.  I milled the remaining pieces of Live Oak on Wednesday night and all day Thursday.  Friday morning I loaded all of the milled wood onto a trailer and moved it back to Tennessee.  Saturday morning we got into another car and drove back down. We then rented a truck and packed the contents of the house into this truck.  The following Friday, we closed on the house and drove the entire thing back to Tennessee.  I call it the 10 days of hell.  But, we got it all done and all but one of the Live Oak logs were relocated.

Although the wood was free, I spent a huge amount of time milling this lumber into slabs.  I needed to purchase a rather expensive Chainsaw and a special bar and ripping chains to get this job done.  I have about 300 board feet of live Oak but the investment in time and equipment was substantial.  I am still well under the price that retail outlets sell these boards so ultimately, I have created a valuable asset.

Over the year, I milled about 300 board feet of some nice clear Cherry, about 450 board feet of Yellow Pine, and 350 board feet of the Live Oak. Everything is stacked and stickered and drying nicely in the Tennessee sunshine.  I’m well on the way to building a Woodworking Business. 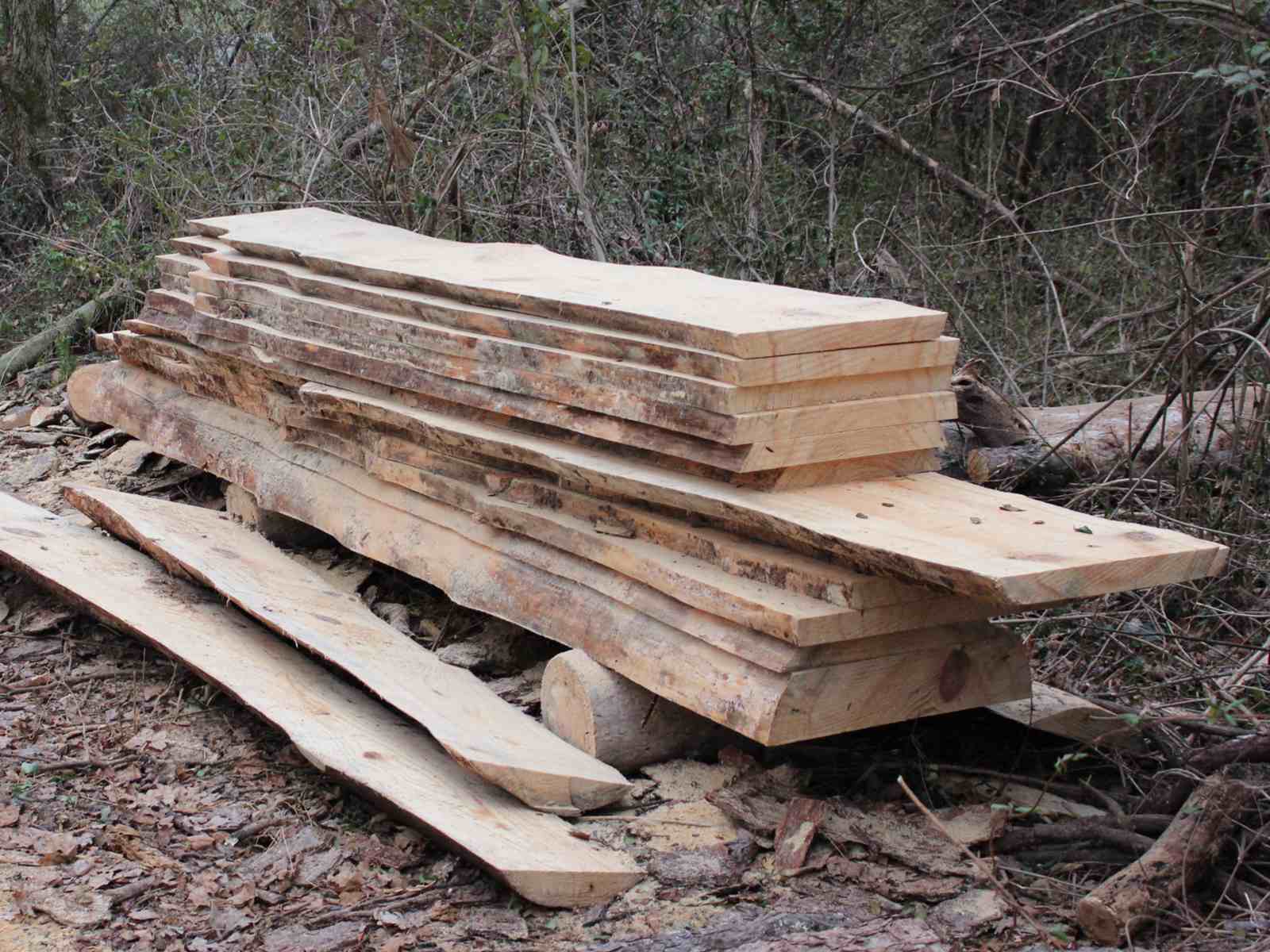 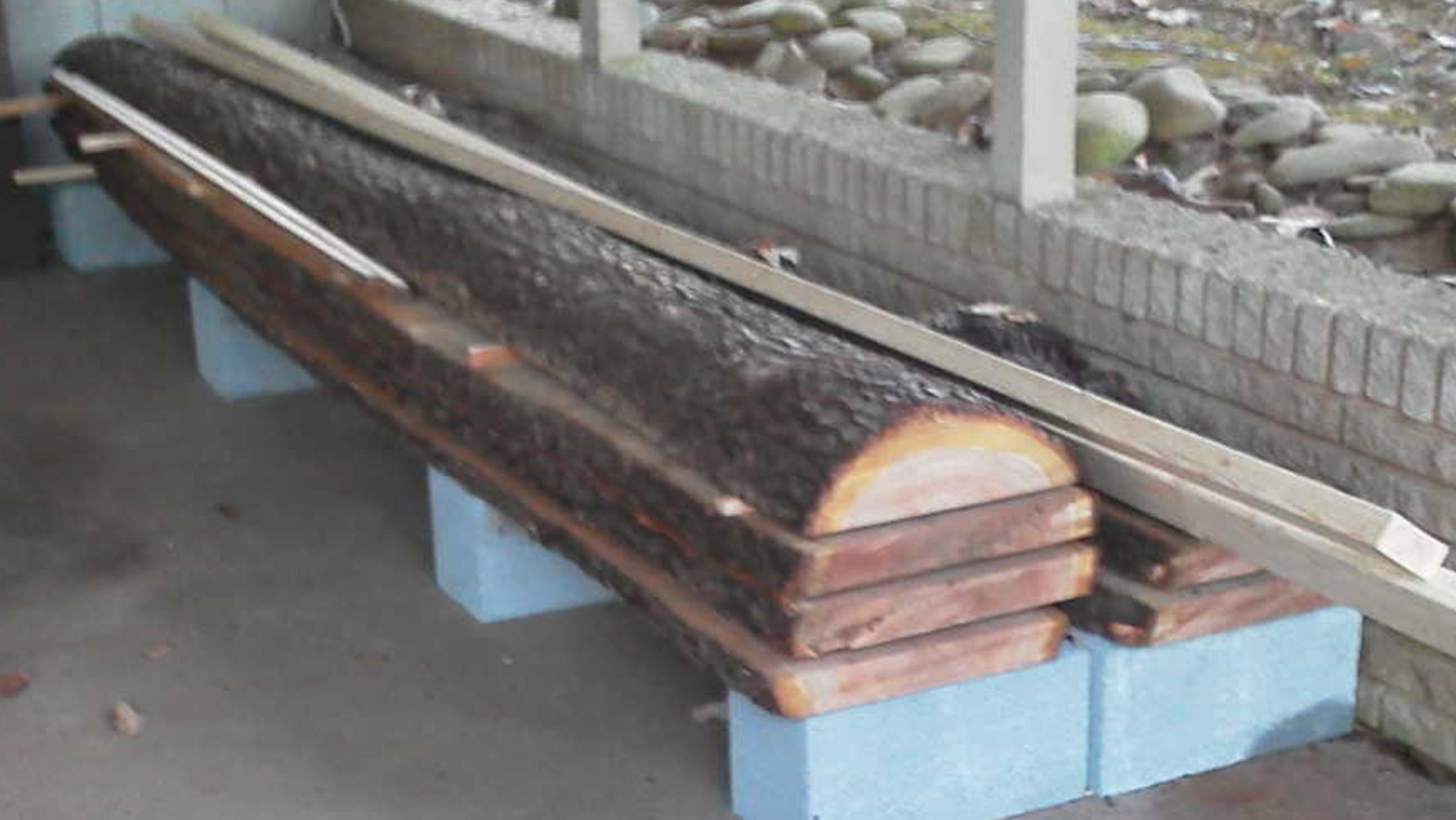 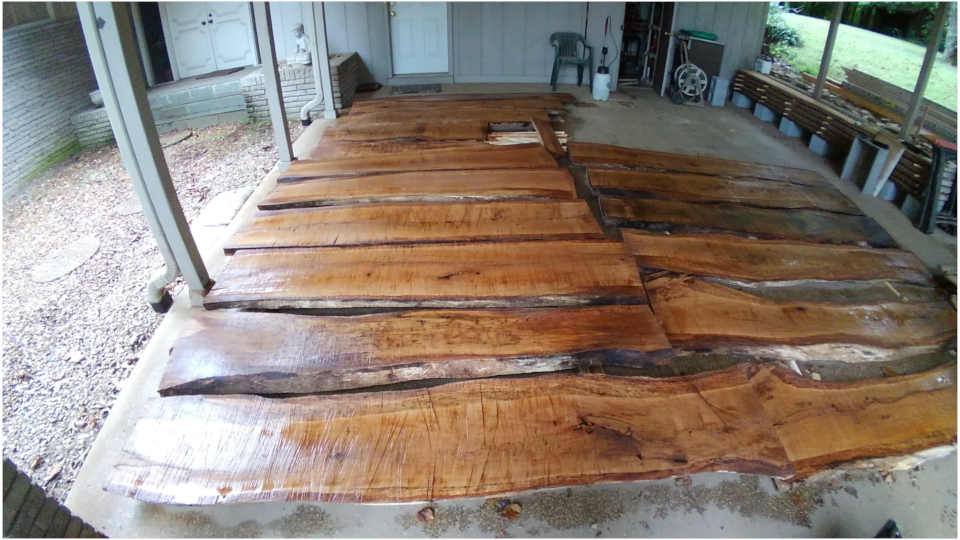 Once all of the furniture had moved, it was time to do a few restorations of some of the furniture.  Two Teak outdoor chairs had to be cleaned and refurbished, a wooden garden bench needed to have the legs replaced and the entire thing needed to be reassembled and repaired.  We also had purchased some Shiplap that had been intended for a feature wall on the Island that never was installed.  This became a 5 ‘ Wooden American flag.  When all of these were complete, I made a couple of rustic benches from some of the Yellow Pine that I milled and then used a bit of the Live Oak to create a Sailboat Wall Hanging and a display stand with a partially live edge.

I was attempting to see what was doable in my current workspace.  A formal shop was not available so I made do with a couple of sawhorses made from 2x4s and a 2×6.  I had a single 110-volt electrical supply and a 400 square foot carport.  Challenging conditions but usable.

Keep following along with my story.  Soon I will have a nice size workshop and start laying out my workspace. I have made a down payment on a 24 x 32 foot shed.  After doing battle with a hedgerow, the location is cleared and ready to lay out the base for the installation.  Next, I will be laying out the foundation and getting ready to have the shed installed in its location.

I’d love to get your input into optimal layouts and what you think I should do to make the space functional and efficient.  Feel free to comment below.