I had a bit of shiplap saved from a project that we were going to do to the house in Hilton Head.  Since we no longer have the house down there, we had 13 8 foot long pieces of the shiplap that were just sitting around. I have seen some folks making American Flags on various craft sites and have heard of people making a good living from selling these.  Then my girlfriend’s brother indicated that he wanted one to hang in his store.

Well, I didn’t want to make him one but thought I would take the shiplap that I had and create a Handcrafted Wooden American Flag Wall Hanging for my own shop wall.  Of course, I’m still working on a permanent place to work but it can’t hurt to have some decorative items to dress the place up when I find it.

How Big to Make the Flag

I have done some research into the correct size to make a flag.  I could use the g–spec dimensions which are the official dimensions for flags flying on government buildings.  In common use, flags are standard sizes with ratios of the length to a height varying from 1..5 to 1.667 (G-spec flags are 1.9).

The size of the field for the stars, the spacing and the dimensions of the 13 stripes and the stars are also specified as ratios of the length and height. 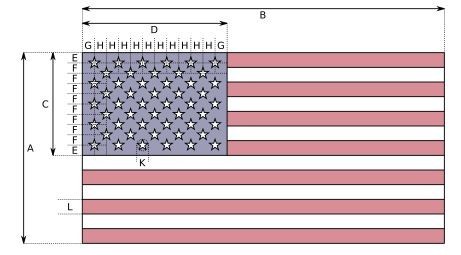 I sat down and determined that I wanted to have a 60 inch flag. The common display size for this is a ratio of 1.667 making the stripes very close to 2 3/4 inches.  I settled on these dimensions: 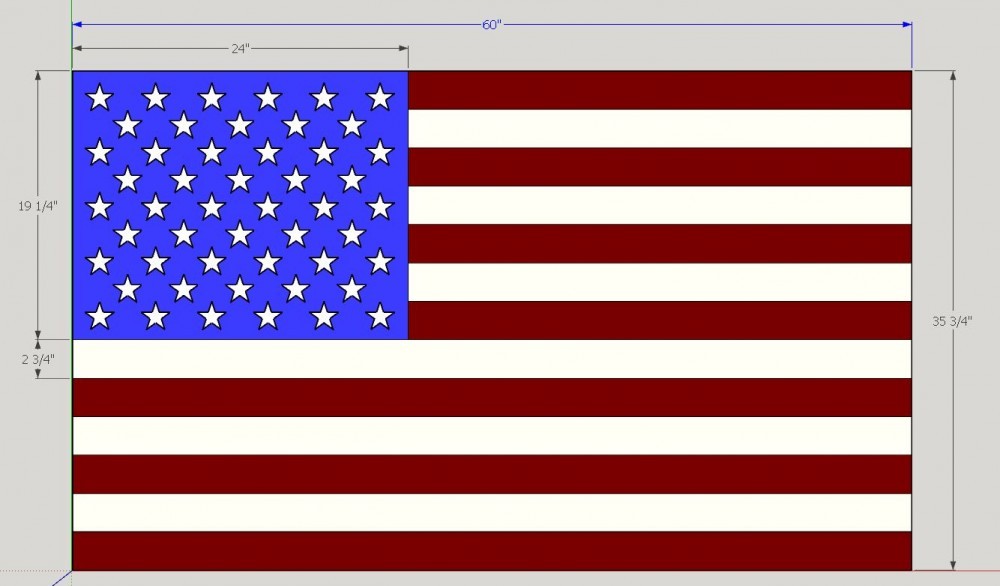 Get Our Free Flag Sizing Spreadsheet

A Subscription to our email list will provide you with notifications of new posts, occasional free plans, downloads and reviews of products we have tested or used.

We don’t like Spam and you shouldn’t either.  We will never sell or distribute your email to anyone else.

The Background of the American Flag Wall Hanging

While often people will make their flags one level deep, I wanted to have a flag with some depth so I decided to layer the boards on top of one another.  I started by laying out shiplap cut 60 inches long.  I screwed these to a pair of backing plates with 2 screws per board.  I gave them a quick pass with my belt sander to level them off and remove most of the primer coat that they had been sprayed with.

I then trimmed the width to 29 3/4 inches with a skill saw guided by a straight edge guide.

Finally, I gave the entire background a coat of off-white .  I wanted the flag to be a bit rustic and to have the grain show through.

The Stripes and the Field of the Flag

The next level of the flag is the stripes.  I fired up my Radial Arm saw for this one and set the width of cut to 2 3/4″ to cut the 7  red stripes.  Then I adjusted the width to remove 1/8 inch from the tongue of each of the leftover boards so that I could glue up the Blue field without spacing.

Each of the shiplap boards has a tongue that is 5/8 inch long but the overhung piece is 1/2 inch.  When these are glued edge to edge an 1/8 inch spacing is created. By removing the extra 1/8 inch from the tongue, I was able to make the field tight and appear as a solid piece. 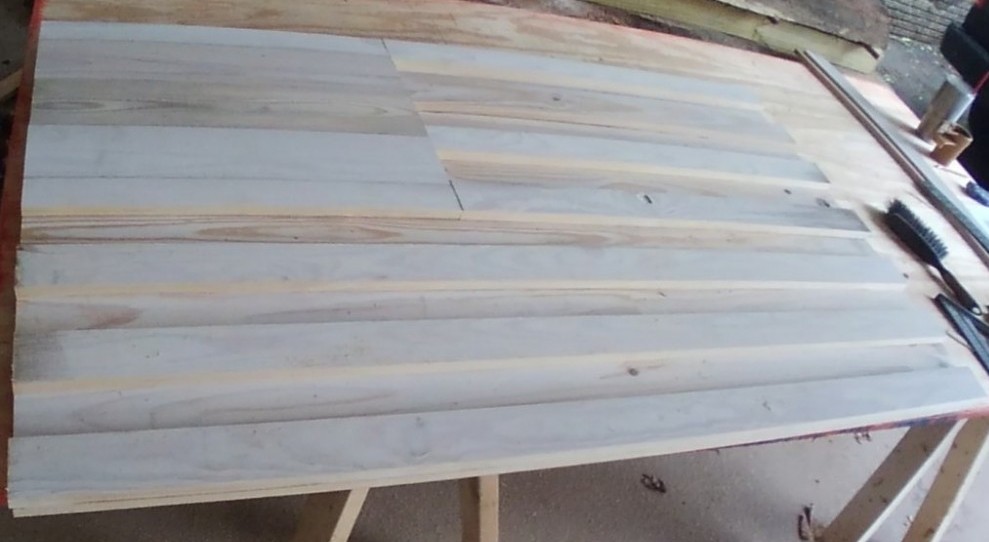 When the stain was dry, I glued all of the boards in place and clamped them down with cauls stretched across the boards to hold them tightly to the background while the glue dried.

Laying out the stars was a bit of a challenge but they ended up 2″ tall.  The points were 72 degrees and the full circle radius was 1.1 inches.  I marked out the angles on the circle and just connected the dots.  I carefully cut one for a template and then laid them out on a sheet of luan plywood. I had originally intended to make 50 stars but after cutting for a while, I settled on the round Betsy Ross design with 13 stars in a circle pattern. 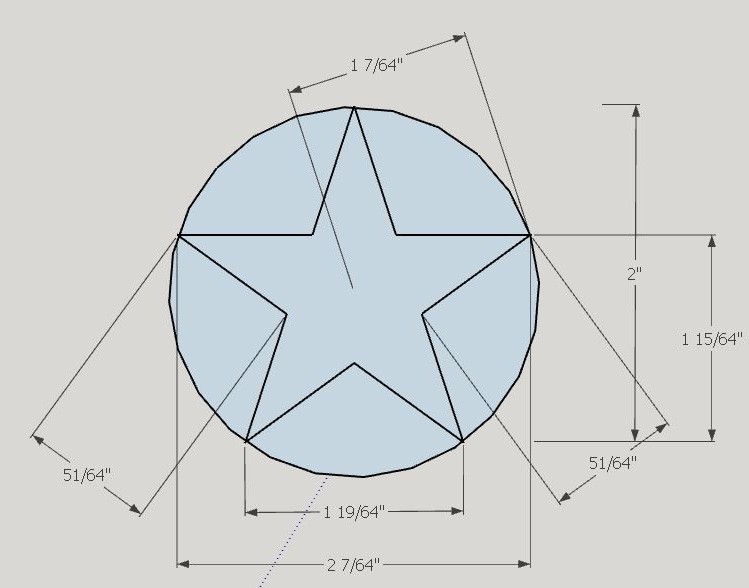 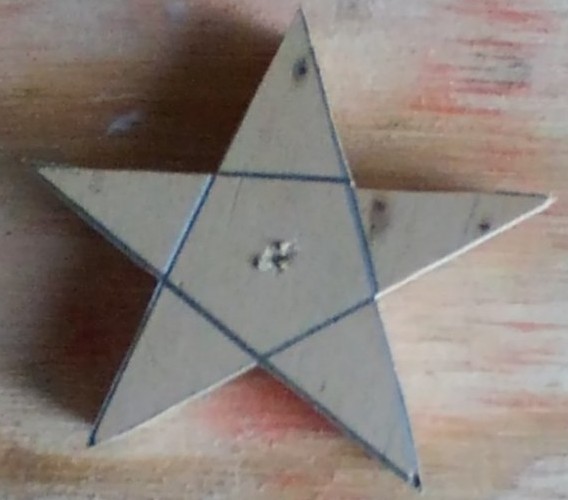 I bought some metallic grey paint for the stars.  This makes them stand out against the Blue field but is a bit different than most of the white stars that I see people using.  I like the effect but the contrast is quite subtle.  In the sun, the raised stars with the subtle contrast make an outstanding effect.

Pulling it all Together

Now that I have all the parts stained and sized it was just a matter of putting it all together.  I started with a red stripe at the bottom of the background and used the other stripes as spacers to keep everything aligned as I glued the next stripe in place.  Each strip was glued and clamped at the ends.

When I reached the field I placed that in the upper left and continued up the Right side with the short red stripes.

When everything was in place, I clamped 4 scraps across the entire flag and added some thin spacers under the center of the flag.  These provided extra pressure in the center so that the glue spread nicely.  A few extra clamps around the edges made everything secure while the glue set.

I laid out a paper circle on the field with marks at the locations where I wanted the stars to be and lined them up with the inside bottoms of the stars on the edge of the paper pattern.  This gave me an accurate layout for the stars. I was just going to wing it with the location but I just couldn’t get my head around the extra star on the clock points.  No matter how many times I tried to lay them out by eye, they just didn’t look right.  The pattern piece solved the problem and everything went smoothly. 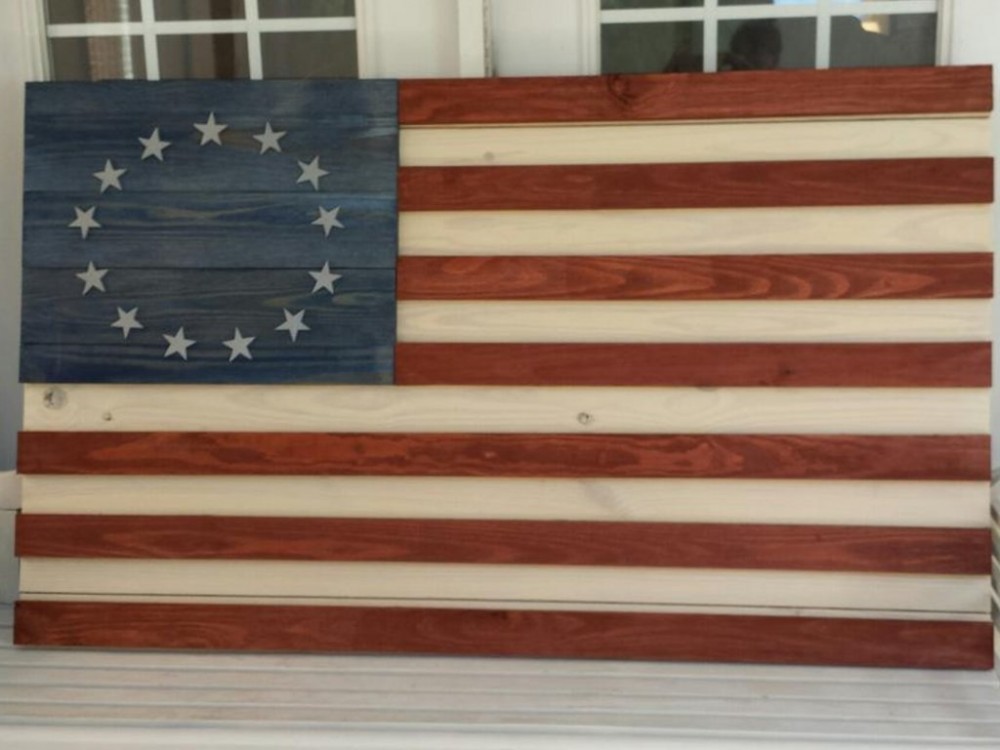 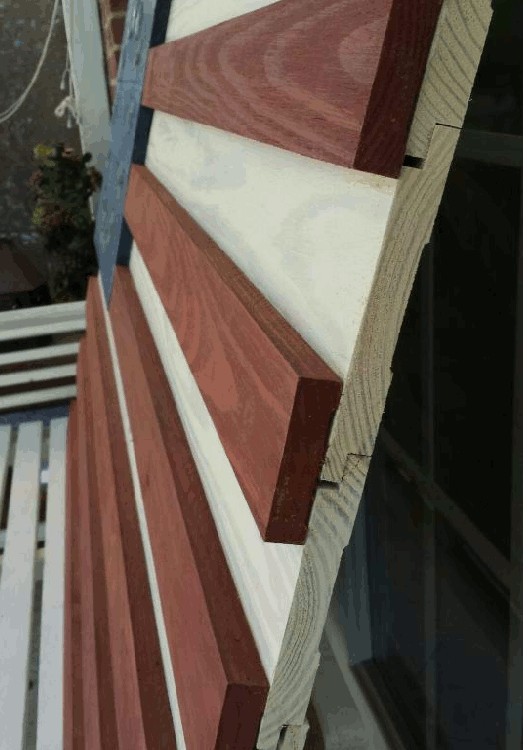 I am pretty happy with the way that this turned out.  I like the 3-dimensional nature of this flag.  The Stain colors, while not accurate, give the flag a nice rustic feel.  The grain of the pine shows through nicely giving it a warm comfortable feel.

It was fairly easy to put together and didn’t take a whole lot of time but does make a good impression.

If you feel like giving this one a try, let me know how it came out for you in the comments.