Last year we finished up the repairs on the house in South Carolina. On the back porch, there were a couple of wooden chairs that had been sitting out in the weather for many years. While they were gray and had moss growing on them, I could tell that they were nice quality furniture. I suspected that they were teak but before I got started I wasn’t sure what wood they were made from. In any event, I decided that it was time to clean these up and see if there was anything under the grime. Here is the process that I use for refinishing teak furniture.

This is a picture of the chair before I started. you can see how gray the wood is turned and you can see bits of varnish that are clinging to the surface. 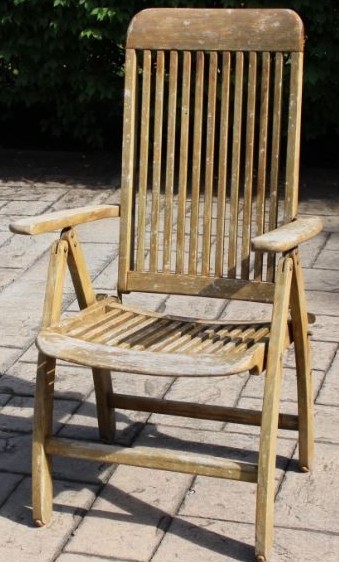 I started with a green scrubby pad and some water. I went over the entire pair of chairs and removed as much of the algae as possible. The chair started looking a little bit better but it had a long way to go.  The wood showed its potential when wet with a nice brown patina that disappeared as the chair dried. There was not much finished left but in places, there was just a touch of some sort of lacquer holding on by the skin of its teeth.

For the first chair, I decided that I would try to use my cabinet scrapers.  After putting a fresh edge on each of the scrapers I started the tedious process of removing the clinging finish and scraping down all of the surfaces. The grain had been raised in a few places from exposure to excessive amounts of water. I spent the better part of three days scraping the wood down to a clean surface and smoothing it to the best of my ability. In a few places, I used some sandpaper although I found that it didn’t leave nearly the smooth surface that I was getting from the cabinet scrapers.

While I was sanding these chairs, I considered dismantling them but I was able to reach all but a small portion so I figured that it would be more trouble than it was worth to take them apart and then reassembled them. I did find a crack in the support for the seat. Using a small screwdriver I opened up the crack and injected in some carpenters glue. After clamping it and leaving it overnight it appeared to have provided the necessary support for this section of the seat. This was the only repair that needed to be done on this chair.

When I thought I was done, I soaked the chair with water to raise the grain in the wood. In some places, this exposed where I needed to remove more of the varnish, in other places it raised the grain and needed to be re-sanded. When I was finished with the touchups I went over the entire chair with a tack cloth to remove all traces of sanding dust.

Now it was time to start applying finish to the chair.  I have always been a fan of Tung oil for items of this sort.  The oil finish works well with Teak.  Teak has natural oils in it that can repel some hard finishes like Polyurethane.  However, Tung oil is an indoor finish.  It contains no UV blocking additives so may not be the right finish for a chair that is going to be outside in the sun and weather unprotected.  After doing a bit of research into the various oil finishes I found that the right oil to use in this application should be Teak oil. Teak oil contains an additive that blocks Ultraviolet rays, it is also formulated for outdoor use.

I did, however, have a can of tung oil so I applied three coats of tung oil. the sanded wood was very thirsty. It absorbed the first coat of oil almost immediately. I let the tung oil dry for several hours then reapplied another coat. I let this dry overnight. In the morning I resanded all the surfaces with 400 grit wet dry sandpaper. After cleaning all the sanding dust with a tack cloth, I applied the third coat of tung oil. I could’ve stopped at this point but I decided after doing my research that at least one coat of teak oil needed to be applied. I didn’t have any teak oil available so I put this chair aside to dry while I worked on the second chair. 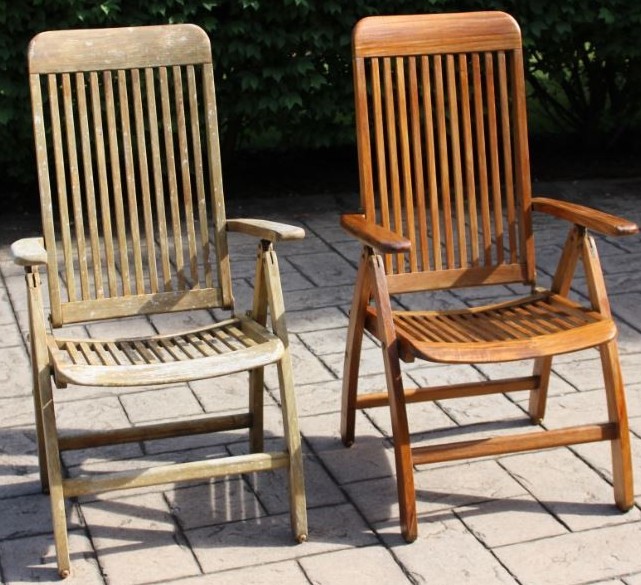 With the second chair, I decided to take a slightly different tactic.  I pulled out my random oscillating sander and put a fresh 100 grit disc on it.  Then I strapped on a respirator and went to work. I power sanded the chair with the random oscillating sander then worked on the details in the corners and between the slats with an oscillating multi-function tool with a triangular sanding attachment.  I still had to get out the cabinet scrapers or some of the detail work but the work went faster.  I completed the sanding by hand with 400 grit sandpaper.  I wrapped the sandpaper around a small dowel to help reach in between the slats.

The second chair had one seat slat that was broken.  There was a knot in this slat that failed and the slat was cracked about 70% of the way through.  I tried carpenters glue but the break continued to open up.  I upgraded to Epoxy and allowed this to set but the same problem reoccured.

After thinking about how to effect a repair without disassembling the seat, I finally settled on reinforcing the underside of the slat with a piece of wood that spanned the break.  Basically, I needed to install a spline.

I flipped the chair over and clamped a piece of 1/4 inch plywood to the bottom of the seat between the front and back rails.  Then I installed a pair of guides to keep a router moving in a straight line centered over the broken slat.  I put a 1/4 inch router bit into my router and made multiple passes until I was about 3/8 of an inch deep.  With the slot cut, I epoxied a Red Oak spline with absolutely straight grain and no defects across break into the slot that I cut.  I filed a round-over on the ends of the spline to fit the round slot created by the router bit. Once the Epoxy was set, I sanded it flush with the bottom of the slat.

While the repair isn’t completely invisible, it is on the underside of the seat so it doesn’t interfere with the aesthetics of the chair.  It seems to be holding up well to repeated use.  I would have to say it is a successful repair.

With the repair completed, I finished the second chair with 4 coats of Teak oil.  I also gave the first chair a final fourth coat with the teak oil.  The Tung oil and Teak oil are similar products that are fully compatible with each other.  The Teak oil will provide some UV resistance so that the sun will not be a problem with the long term wear of the finish.

Here are the two chairs renewed and ready for another Quarter Century of use.  I may find that the finish needs to be renewed in a few years but I’m confident that if we stay on top of the finish these chairs will look and perform well for a long time yet. 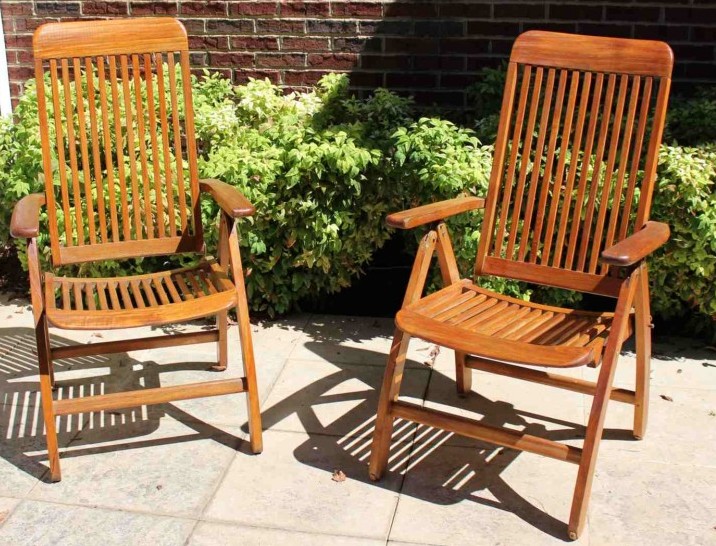 I think power sanding reduced the amount of time required to clean this chair but the finishing work was still tedious.  The final outcome was similar but the color is a bit lighter.