Over the years I have fallen in love with Live edge tables.  They seem to be quite popular in the marketplace now so I decided it was time to put together a Live edge wood slab coffee table.  My girlfriend’s son was moving into a new apartment and needed a table to complete his space so this seemed like a perfect time to put one of these together.

Back in the 90’s I had done a live edge cherry dining table.  One of my friend’s dad had decided that he wanted to duplicate his custom dining table as a gift for his daughter’s wedding.  He has property in the Adirondack mountains and just happened to have some fully dried slabs of cherry stored in a barn.  Checking the moisture content I was amazed to find this air-dried stack at 8%.  But I digress.  I’ll post on that project at another time when I can acquire some pictures of that table.

This project started with a trip to Everhart Lumber in Sweetwater TN. While their website is a bit antique, they do have a nice selection of slab lumber at their store in Sweetwater.  All of the slabs have been kiln dried in their wood-fired kiln and they have been sanded flat once the drying process is complete.

I purchased 3 slabs from them.  The most beautiful of these is a 2-inch thick piece of Black Walnut about 7 feet long.  It has a bit of a curve and is 3 feet wide at one end and 26 inches at the other.  I’m probably going to make this into a bar top.  The second slab is another 7 foot long and 28 inches wide mineralized Poplar board.  The third, another smaller piece of mineralized poplar.  I chose the smallest of these for the Live Edge Wood Slab Coffee Table. 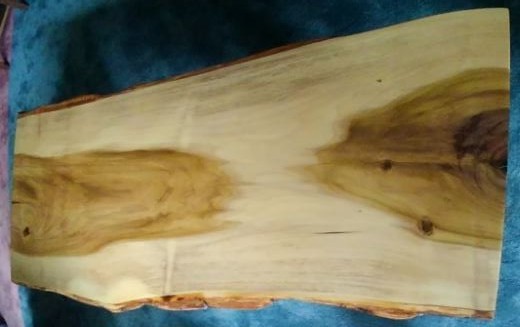 The first thing I need to do with this board was to stabilize the bark on the edges.in the picture above you can see that there is some bark left on. The reverse side has quite a bit more bark. I had to decide whether I wanted to remove it all or leave it on and make sure that it wouldn’t fall off over time. Since I like the way that it looked I decided that I would stabilize it.

I mixed up a small single shot batch of West system epoxy with the 205-hardener and applied it with a foam brush.  Fresh epoxy wants to run so I need to continuously go back and gently move it to remove the drips until the reaction started. Once the epoxy started to catalyze I used a heat gun to raise the bubbles out of the epoxy. The second coat of the epoxy,  once the first was cured, was all that was needed to stabilize the bark.

The ends of the board had some significant imperfections that I wanted to remove. The ends were also ragged and not square to each other.  I chose an arbitrary point at either end and snapped a string line that I used this line to determine square.  Using a carpenter square I created a line at either end that removed most of the problem wood, then cut the board using a straight edge and a skill saw.

The slab had already been through a thickness sander so it was relatively flat but there were a lot of scratches from the sanding. They must’ve used a  rather course grit to flatten the board in their power sander. I put a 60 grit belt on my portable belt sander and went over the entire board with the sander at 30° to the grain this way I could see where I had sanded and where I had missed. Then I installed 100 grit sanding belt and sanded with the grain until all of the angled scratches were removed. At this point, I had a flat fairly smooth live edge slab table top.

When I flipped the board over and looked at the top, there were a few imperfections in the top that needed to be dealt with. I filled these with a mixture of epoxy and sawdust. Two applications were required to fill the cracks and level them with the surface.

I repeated the sanding process on the front of the board. First 60 grit then 100 grit. now the top was ready for final sanding.

Since we were going for a rustic look, I decided that some of the offcuts from the Live Oak that I collected in South Carolina would work nicely for the bases under the table. When I started to chainsaw the Live Oak into slabs the first piece had some wonderfully twisted grain hiding underneath the bark. Instead of sanding this off, I decided to amplify it.

I started by removing all the bark with a four-inch grinder with a 36 grit sanding pad. Then, using a chainsaw, I cut the piece to rough length and sliced it down the middle. I was left with four pieces of Live Oak that basically look like quartersawn firewood.

I pulled out my jack plane  (Stanley #4) and smoothed one end of each piece then leveled the two inside flats.  I used a random oscillating sander with 60 grit then 100 grit to smooth the outer edge of the pieces and filled all of the wormholes that had developed in the sapwood.

Wood Boring beetles appear to have followed me from South Carolina to Tennessee.  They have infested the sapwood of the Live Oak. (Fortunately, they appear to be very specific to the Live Oak and to just the Sapwood.  The harder heartwood appears to be infestation free.)To make sure that these didn’t turn into a larger problem and get out into the woods in the area where I’m now living, I sealed every pinhole with epoxy. When I finished the Live Oak pieces for this table, I made sure that every nook and cranny was sealed with at least four coats of polyurethane. Any remaining beetle larva in these pieces should find it very difficult to breathe. All of the remaining oak that I have drying was treated with a product called Timbor. This is a borate solution designed to kill wood-boring insects. I have seen no further indication that the Beatles have survived this treatment. I am continuing to monitor for any sign of activity. Before I use any more of this wood, I will have it treated in a kiln that can reach 140°F to ensure complete eradication of all of these beetles.

When I had the three sides smooth and squared enough for my needs, I flipped the pieces on the squared up end and drew a line around the other end. I used a jig which was essentially a square piece of wood with a tall dowel attached at right angles. I measured up 18 inches and fastened a pencil through a hole drilled in the dowel. This gave me a rigid reference that aligned to a square surface and provided a reference line to precisely cut a square end on the other end.

I used a knife to deepen the marked line then cut with a Sawzall near the line. The knife cut kept the reciprocating saw from creating tearout as I cut the pieces to length. I finished leveling to the line with my Jack Plane and a Belt Sander. 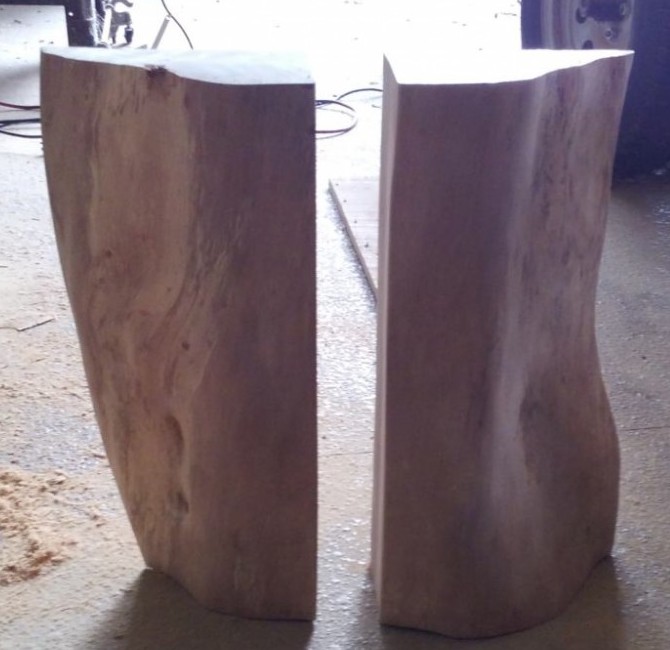 With the 4 pieces leveled and reasonably square it was time for the finish.  I needed a durable finish and one that sealed the wood to keep the Boring beetle larvae inside the wood.  The Live Oak is also somewhat moist so I want any additional drying to happen slowly and not crack the supports.  Polyurethane fits the bill nicely for this.  I chose a satin finish.  A nice shiny surface is good for some things.  This rustic table didn’t need that level of shine.

I put on 4 coats.  Each coat was sanded with 220 grit sandpaper in a random oscillating sander and then fully dusted with a vacuum and a tack cloth.  The tack cloth leaves a sticky residue behind but this is dissolved by the next coat of Poly so it isn’t a problem with this finish.

The final coat was applied after finishing with 400 grit sandpaper.  This achieved the smooth hard finish that I was after and looks nice against the Poplar top.

The only remaining task was to fasten the base pieces together into a rigid structure to support the top.  I found some 5 inch angled brackets that held the pieces at a 90-degree angle.  This provided support to within 4 inches of the edges of the top and was sturdy enough to keep the top level and square to the floor.  A couple of pieces of foam shelf paper cushioned the irregularities and allows the variations in the top to be smoothed out.  It sits flat and square.

Here are the finished leg assemblies ready for the final application of finish. 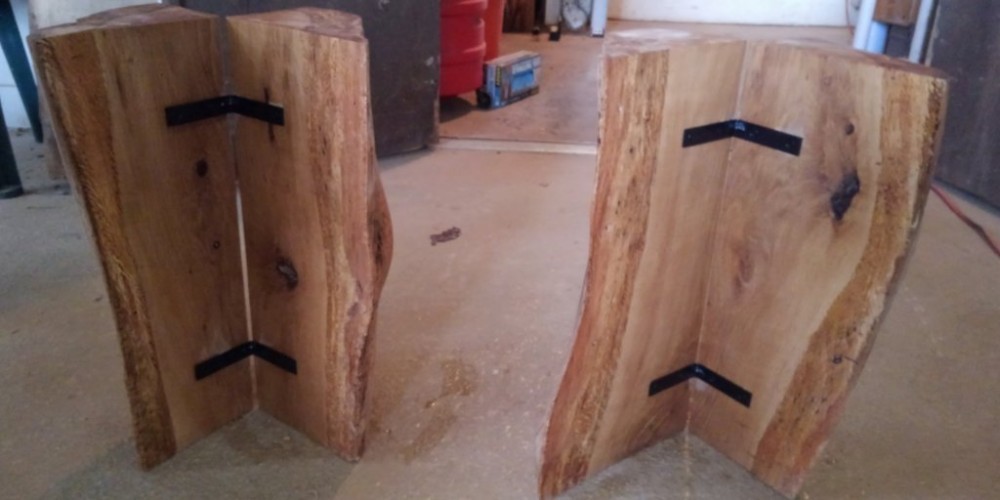 Here is the finished table in its final resting place. 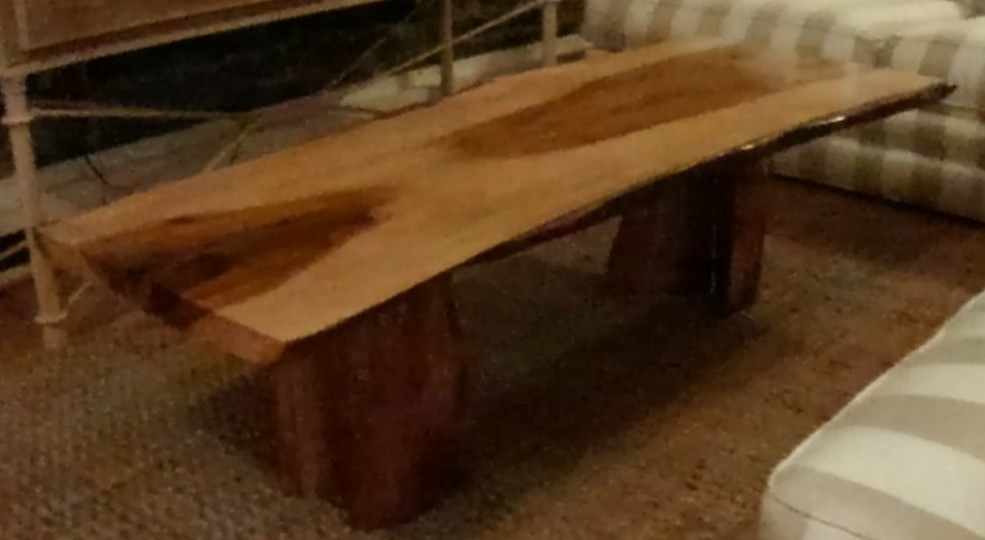 Do you like the look of this table?  It was a fun project that took about 2 weeks to complete.  I’m sure that I can cut that time down on the next one.  I’m still rolling all of my tools back into storage each night and cleaning up the area so that the dust doesn’t get out of control.

Feel free to leave me a comment below and tell me what you think.